My name is Jacqueline T. Lynch, author of Ann Blyth: Actress. Singer. Star.,
and I would like to invite you to join my mailing list HERE for updates, special offers, and a free eBook! According to gossip columnist Hedda Hopper, who reported in December 1947, “…Of all the promising youngsters in our town, I predict the brightest future for Ann. She’s got it. In Mildred Pierce, she stole many scenes from the star.”

TCM resisted the temptation to put this film-noir view of mother-daughter love on Mother's Day this year, but we see it's on the schedule for today.

Have a look here at Ann Blyth's Oscar-nominated role in Mildred Pierce at this post on my Another Old Movie Blog. For more on the movie, and her career, have a look at my book on Ann's career -- Ann Blyth: Actress. Singer. Star.
eBook edition (Amazon)
print edition available at Amazon and also my Etsy shop.
audiobook edition
Also available in eBook at:
Kobo
Barnes & Noble
Apple iBooks 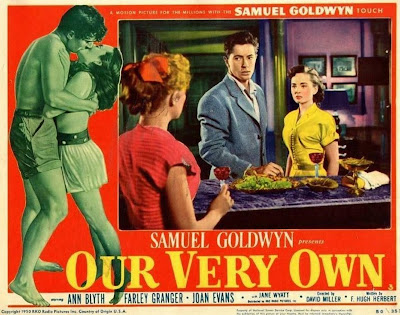 Ann Blyth stars with Farley Granger and Jane Wyatt in an absorbing family drama, Our Very Own (1950).  It's up next on TCM today, but you can read a detailed analysis of the film here at my Another Old Movie Blog, and also in my book on Ann's career -- Ann Blyth: Actress. Singer. Star.
eBook edition (Amazon)
print edition available at Amazon and also my Etsy shop.
audiobook edition
Also available in eBook at:
Kobo
Barnes & Noble
Apple iBooks 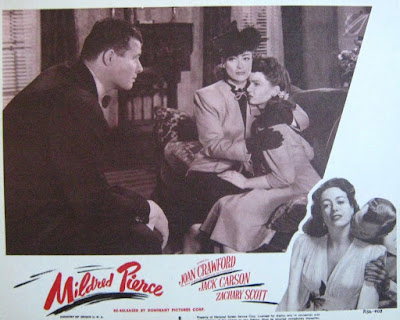 [Director Michael Curtiz] had not wanted the “goody-goody” Ann for the role of the evil daughter Veda, either, and need not have considered her when a vast number of young starlets were clamoring for the role.  Ann’s agent, Al Rockett campaigned on her behalf, insisting that she be allowed to test.  In a most unusual occurrence, established star Joan made the test with her.  As quoted by Joan C. Scrivani in her article on Mildred Pierce for Scarlet Street, 1994, Joan remembered:

“I was there when Ann came in.  She was so lovely that my first reaction was she’s too sweet; she’ll never be able to play the bitchy scenes.  But we read together and she was wonderful.  Then we tested together.  Ann was perfect.  She was the right age, the right type, a superb actress and singer.”

The test was directed by Michael Curtiz.  Ann remembered for an interview with Jessie Lilley in Scarlet Street:

“We took scenes from the movie as though we were actually shooting the movie.  We just didn’t read for the part; we filmed the test.”

Curtiz later told her, “in his wonderful Hungarian accent, (imitating him) ‘Don’t worry Annie.  You haff de part.’”  He became one of her most favorite directors.

Posts may contain affiliate links, for which, as with the sidebar ads, I may receive compensation.

A book on the career of actress Ann Blyth. Available in paperback, eBook, or audiobook.

Mr. Peabody and the Mermaid - DVD

One Minute to Zero - DVD

The World in His Arms - DVD

All the Brothers Were Valiant - DVD

Thunder on the Hill - DVD